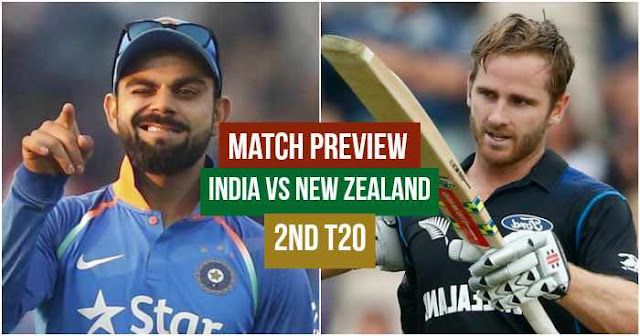 India coming with winning the first match in Delhi and also the first against New Zealand in total six played against them. A perfect farewell to the Ashish Nehra, who retired after the match. India posted the mammoth total of 202, which the help of the 80s from both openers, Shikhar Dhawan and Rohit Sharma. Indian bowlers were perfect in line on the slow turning pitch. India played with the five bowlers’ combination, which paid off. Regular wickets fall made the Kiwis helpless. In the 2nd T20, it will be interesting to see if India plays with five bowlers or not. If India plays with five bowlers than Mohammed Siraj is likely to get the chance otherwise it will be the choice between Dinesh Karthik, Manish Pandey, and Lokesh Rahul.

New Zealand both the department bowling and batting were not up to the mark. Bowlers were not able to pick early wickets, which helped India to build a total of 202 out of which 158 was the opening partnership. On the other hand, regular fall of New Zealand batsmen made them look crumbled while chasing.