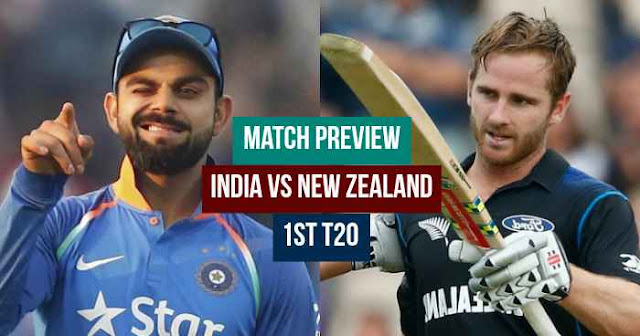 The first T20 of the series between India and New Zealand will be played at Feroz Shah Kotla, Delhi on 1st November 2017.  After 18 months T20 International will be played at Feroz Shah Kotla ground. The last match played here was between England and New Zealand during ICC T20 World Cup 2016 in March of 2016. India had never played T20 International here and these will also the 5th T20Iat this ground.

India has never defeated New Zealand in T20 International in 6 matches played out of which New Zealand won 5 of them and 1 ended in No Result.

This match will be the farewell match for the Ashish Nehra, as he announced his retirement from all forms of cricket shortly after the Australia vs India series last month.

India is in full confidence and coming with the win in ODI series. This will be a special match for the team India; giving farewell to Ashish Nehra. Mumbai opener Shreyas Iyer and Hyderabad pacer Mohammad Siraj got their debut call to play for the national team but it will be interesting to see if they get the chance in playing XI. Lokesh Rahul, who was also included in 3 ODI series squad against Australia but didn’t have the place in playing XI. Kedar Jadhav is dropped so Shreyas Iyer or Lokesh Rahul can be included. It will be interesting to Jasprit Bumrah or Bhuvneshwar Kumar who is dropped to make the place for Ashish Nehra.

New Zealand will be playing T20I after a gap of more than 6 months. Ish Sodi is likely to get the place in playing XI.

Feroz Shah Kotla has an average score around 145. In 4 T20I played here, 2 are won batting first and same by batting second. With the highest total of 171 and highest total chased here in T20I is 159.