Noise for IPL (Indian Premier League) 2018 has started, with Vivo retaining the IPL title sponsor for five years from 2018 to 2022 for Rs 2199 Crores. The bid was 554% increase over the previous contract as conveyed by the IPL official Twitter handle on Tuesday stating, 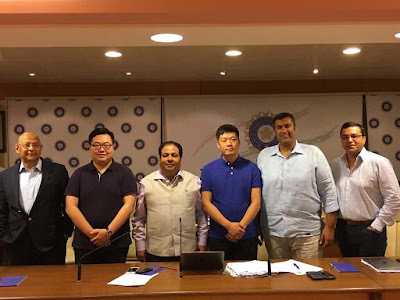 Chinese mobile manufacturer Vivo had bid for Rs 2,199 Crores while their competitor in the mobile industry as well in bidding, Oppo was the second highest bidder with Rs 1,430 Crores.

Also read: All about how IPL Works, Team Owners and Revenue

The premium global Smartphone manufacturer (Vivo) bid Rs 2199 crores, which is a 554 percent increase over the previous contract. In the upcoming five IPL seasons (2018 - 2022), Vivo and IPL will have extensive cooperation in terms of sports events, on-ground activations and marketing campaigns.

In and statement by IPL Chairman Rajeev Shukla said,

We are delighted to have Vivo joining us once again as the title sponsor for IPL for next five years. The association with Vivo has been great for the past two seasons and I am sure they will continue to make it bigger and better.

Vivo as a brand has carved its niche and legacy in the market. We are extremely glad to have Vivo as the title sponsor and look forward to an enriching affiliation for both stakeholders.

We received an overwhelming response for the title sponsorship rights and we are glad to have Vivo back on board. It is a renewal of a fruitful relationship with the brand that will extend for the next five years.