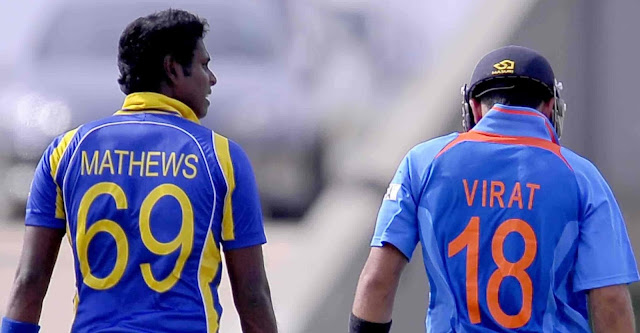 8th Match of ICC Champions Trophy 2017 will be played between India and Sri Lanka at Kennington Oval, London on 8th June. Weather is in no mood of the match; whole day rain is forecasted. The wicket had green grass on the top which will help the pace bowlers but a high scoring match can be seen.


India is coming with the win against their arch-rival Pakistan; won by 124 runs. India had found their right combination in their first match and will settle with it. But seam-friendly green wicket will be challenging for the both the team as they had more favourable to spin wicket. While when Indian captain Virat Kohli, was asked about the wicket he said “It feels good that we have four-five bowlers who can change the game anytime with their skills. The batsmen also feed off this confidence a lot, because you know that your bowlers will bowl very well, and as a batsman, if you’ve batted well, you know that the match will swing your way.”


And when the Sri Lankan skipper was asked about how they would take the green wicket, he said “There is a little bit of grass, but don’t really know as of now, how the wicket will play. If the sun comes out, it might be a different case. We’ve got to play on whatever we get. It’s not going to be an excuse. We’ve got to put up the runs on board, whether we bat first or second”

Sri Lanka had lost their opening match against South Africa by 96 runs. They looked one of the weak team in the tournament and the weakest in their Group B but with the likes of Lasith Malinga, Suranga Lakmal, and Nuwan Pradeep can turn the game on this green pitch.

This will be the 150th ODI match between India and Sri Lanka; they will become the first teams to playing against each other. First ODI between them was played in 1979 at Manchester which was won by Sri Lanka. Of 150 matches India had won 84 of them and Sri Lanka had won 54 of them and rest ended on no result or tie. They will meet after 2.5 years; last time they played was in Nov 2014 at Ranchi which was won by India. Last time when they meet in ICC Champions Trophy was in 2013 at semi-final where India beat Sri Lanka by 8 wickets.

Man of the Match: Kusal Mendis