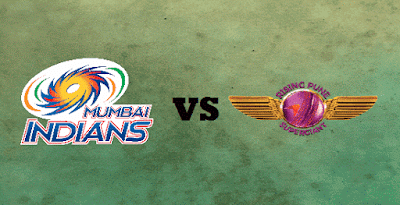 Qualifier 1 Match of Indian Premier League (IPL) 2017 will be played between Mumbai Indians (MI) and Rising Pune Supergiant (RPS) on 16th May at Wankhede Stadium, Mumbai. High scoring game will be seen and dew in the later in the match will make chasing better. While in seven matches played at Wankhede this season, dew had not really made a big difference as 4 times the team won chasing while 3 times when batting first.


Team which win this match will be directly in final and losing team will get one more opportunity and will play against the winner of eliminator on 19th May. Mumbai Indians had won 10 matches of 14 played and top the table and got their match at Wankhede. Their concerned will be that they had lost both games played against their opponent Rising Pune Supergiant this season and while in Mumbai RPS had won both game played against MI in IPL. Mumbai Indians and Rising Pune Supergiant are both team which were not able to qualify last season.

Rising Pune Supegiant starting the tournament on lower note and lost three matches of the first four played and then came back strongly and won eight matches of the next ten to finish second on the points table. Defeated Mumbai Indians in both matches in this edition of IPL will provide upper hand for Rising Pune Supergiant. The momentum of RPS will help them as MI had few losses at the end of the league stage.


Mumbai Indians are likely to play the same playing XI which won against Kolkata Knight Riders in the last match. Bowling looks more settled with Mitchell Johnson in as Lasith Malinga doesn’t look effective this season. While Pandya brothers had been key members of the MI this season and both of them will make into playing XI. Same as MI, RPS will also not like to tickle with their playing XI at least after defeating Kings XI Punjab by 9 wickets. RPS bowling looks well settled and in the absence of Imran Tahir, Adam Zampa has been the best replacement.

Head to Head: MI vs RPS

When it comes to head to head between Mumbai Indians and Rising Pune Supergiant, RPS had defeated three times IPL of four matches played; two times this season and one time last season. Out of three RPS managed to win both matches at Wankhede. Records and momentum both are in favour of Pune let’s see can Mumbai Indians make their way out.

Man of the Match: Washington Sundar