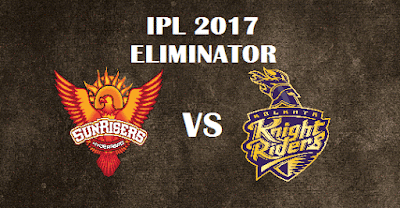 Eliminator of Indian Premier League (IPL) 2017 will be played between defending Champions Sunrisers Hyderabad (SRH) and Kolkata Knight Riders (KKR) on 17th May at M. Chinnaswamy Stadium, Bangalore. Wicket is expected to be two faced and difficult to bat on. Rain is expected during the game. While if it rains and match cannot be played and also super over cannot be organised than Sunrisers Hyderabad will move forward to play Qualifier 2. Four matches played at 8 pm this season at Chinnaswamy, team batting first had won three times that open the chances of captain winning toss to select batting first.

Last year also Sunrisers Hyderabad and Kolkata Knight Riders had finished at third and fourth place respectively in the points table. And they also played Eliminator last year where Sunrisers Hyderabad defeated Kolkata Knight Riders by 22 Runs had moved on to win the title. Kolkata had started the 10th season of IPL strongly and were looking to finish the table in top two but at the end of the league stage, KKR lost four of last five matches and slipped down to fourth place.


Sunrisers have won last match and is most probably to continue with the same playing XI. There is less chance of Yuvraj to be in playing XI due to finger injury. Kolkata Knight Riders have to find the combination as they lost last few matches. Nathan Coulter-Nile can make in Playing XI.

Head to Head: SRH vs KKR

When it comes to head to head between SRH and KKR; KKR had 7 wins and SRH had 4 wins in total 11 matches played. They had met twice in IPL 2017 and both are even on one win each. In last encounter Sunrisers Hyderabad had defeated Kolkata Knight Riders by 48 runs.

Man of the Match: Nathan Coulter-Nile