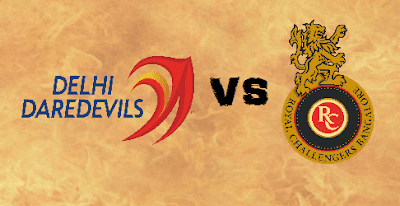 56th Match of Indian Premier League (IPL) 2017 will be played between Delhi Daredevils (DD) and Royal Challengers Bangalore (RCB) on 14th May, at Feroz Shah Kotla, Delhi. This will be the last match of the league stage. While being evening 8 pm match dew will be an important factor and team wining toss will surely like to chase.


Both Delhi Daredevils and Royal Challengers Bangalore are ruled out of IPL 2017 playoffs. Both of them will play their last match of this edition of IPL and will want to finish with a win. Delhi Daredevils had won last two games. Likely to make any change in playing XI, despite of defeats they rarely tickled their combination as they were left with few option after JP Duminy and Quinton de Kock were ruled out of the tournament.

Royal Challengers Bangalore were not even close to what they had thought at the start of the tournament after playing with the same team that were in the finals of last season. They looked uncomfortable form the beginning of the tournament. Royal challengers managed to win only two matches in the 13 played out of which one ending at no result due to rain. AB de Villiers had left to play for national team for England tour.


Head to Head: DD vs RCB

Man of the Match: Harshal Patel