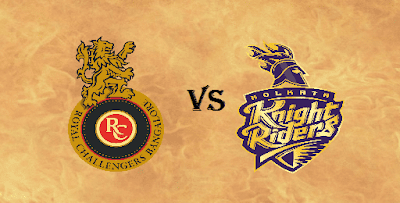 46th Match of Indian Premier League (IPL) 2017 will be played between Royal Challengers Bangalore (RCB) and Kolkata Knight Riders (KKR) at M. Chinnaswamy Stadium, Bengaluru on 7th May. Bangalore is ready to receive the rain two weeks from now. Match has chances to get abandoned as it shows rains at the match time. Bangalore rain may also affect the Eliminator and Qualifier 2 scheduled on 17th and 19th May respectively.


This will be the last match for Royal Challengers Bangalore at their home ground M. Chinnaswamy and second last match in the tournament; one game against Delhi Daredevils is left which will be played after 6 days on 14th May, last match of the league stage. RCB will try to leave with a win for their home fans. Finalist of the IPL 2016, RCB is the first one to be out of IPL 2017. RCB had lost 5 consecutive games and will try as they are to win this one; their batsmen have to perform to win the match.

Kolkata Knight Riders is third in the points table after losing the two consecutive matches; Rising Pune Supergiant had taken the second spot. KKR has come in the danger to be eliminated, so they really want to fix their spot for play-offs as soon as possible. KKR batsmen were unable to perform in the last two matches which lead to defeat. KKR had its two main batsmen Robin Uthappa and Chris Lynn out of playing XI due to injury. Chris Lynn can return in this match as he was seen practising in the nets.


Head to Head: RCB vs KKR

Man of the Match: Sunil Narine