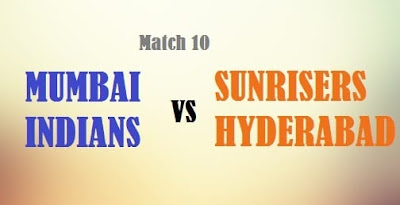 
This will be the third game for Mumbai Indians in this tournament, after losing the first one to Rising Pune Supergiant they had won the second game against Kolkata Kngiht Riders. Last game against KKR was nail biting, Nitish Rana and Hardik Pandya pulled out a coup at the Wankhede Stadium. Nitish Rana’s 50 of 29 balls made him the talk of the town, the one player to have emerged from the IPL 2017. Lasith Malinga is back in the squad but he doesn’t look in the form despite taking 2 wickets. Mitchell McClenaghan is also not looking in form with the ball as he conceded runs with the economy of 12.75 in its 4 overs.

This will be also the third match for Sunrisers Hyderabad in the tournament after winning both matches back to back against Royal Challengers Bangalore and Gujarat Lions respectively. Both the matches were played at Orange Army’s home ground Hyderabad, this will be the first away match for SRH. Sunrisers Hyderabad bowlers sealed the game against Gujarat Lions in the first innings, restricting them to a frugal 137, which was not a par score. SRH bowling department was always strong and the inclusion of Afghan Rashid Khan has made it the most dangerous of all. Rashid took 3 wickets in 4 overs by just giving 19 runs. And rest work was done by the batsmen. SRH skipper David Warner is back in form.


Head to head: MI vs SRH

Total 8 matches have been played between them, both of them had won 4 each. Last two matches were won by Sunrisers Hyderabad but total two matches played at Wankhede goes to Mumbai Indians.

Toss: Mumbai Indians have won the toss and have opted to field