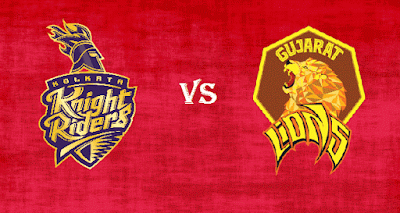 The 23rd match of Indian Premier League (IPL) 2017 will be played between Kolkata Knight Riders (KKR) and Gujarat Lions (GL) on 20th April at Eden Gardens, Kolkata. The pitch is expected to be bouncier as is seen in previous matches and dew factor will be in consideration during toss. This is the 2nd match between KKR and GL in the tournament first match was held on 7th April; Match 3 of IPL 2017.


Kolkata Knight Riders has lost only one match out of 5 they've played so far. Kolkata Knight Riders are consistent till now and are currently competing with Mumbai Indians and Sunrisers Hyderabad for the top places in the points table. While in the last match against Delhi Daredevils at Feroz Shah Kotla, Manish Pandey and Yusuf Pathan played for century stand and ran KKR for the win. Manish Pandey layed superb innings of 69 runs in 49 balls. Return of Coulter-Nile form will be relieving for KKR who took 3 wickets by giving 22 runs in 4 over. Talking about the team changes, Colin de Grandhomme is on the edge of playing XI who had been in for injured Chris Lynn.

Gujarat Lions have only won one game out of 5 played in total and is placed at the bottom of the IPL 2017 points table. Gujarat Lions struggle with bowlers is still continuing as they are unable to find right bowling combination. Lack of experienced bowlers in the squad may be the reason but GL finished on 1st place with the same bowlers. Batsmen performed well and were able to score 192 while chasing 214 against Royal Challengers Bangalore in the last match. Gujarat Lions had to win the maximum of the remaining matches to be in top 4 and qualify for the playoffs.


Head to head: KKR vs GL

Only three matches have been played between KKR and GL in IPL and two are won by Gujarat Lions and the last one by KKR. Last time when they encountered in IPL 2017 KKR defeated GL with 10 Wickets. But by the current team performance KKR is way ahead of GL and will be dominant in the match.

Toss: Gujarat Lions won the toss and elected to bowl

Man of the Match: Suresh Raina