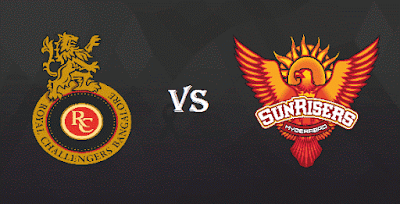 
Royal Challengers’ are back to their home for two matches; after 82 runs defeat by Kolkata Knight Riders in their last game. RCB has been thrown at the bottom of the points table after losing 5 of the seven games. In the last match against RCB batsmen just collapsed for 49 runs which is so far the lowest score in IPL history. It looks worst when your batting line up comprises of Chris Gayle, AB de Villers and Virat Kohli. Not one batsman made it into double digits; the same batting line up scored 200+ against Gujarat Lions. RCB would try to get the momentum with 2 wins before leaving the home. Comparatively bowlers bowled better and did fine job of restricting KKR to 131. While RCB will not go with any changes as bowlers are doing good and replacement of the star batsmen will be a tough job.

Sunrisers Hyderabad is third on the points table with 8 points in their 7 matches. Sunrisers are coming with the loss in this game against Rising Pune Supergiant. They didn’t really do anything wrong per se but ex-skipper Dhoni destroyed their plans. SRH were fine with their bat and managed to put up a score which was 10-15 runs more than the par score. SRH top order did most of the work, middle order or lower middle are not yet really tested in this tournament. Bowlers were unable to execute their plans at death overs.

Head to head: RCB vs SRH

They have played 10 matches against each other and SRH won 6 of them whereas RCB won 4; last 3 matches have been won by SRH. Last time when they encountered each other in the opening match of IPL 2017, SRH beat RCB by 35 Runs.

Result: Match abandoned due to rain